Socrates Trinidad was born in 1990 and grew up in Lynn, Massachusetts. He talks at length about the difficulties he faced during his childhood in Lynn. He joined the military as a “way out” of the poverty he experienced growing up, and chose the Marines because he wanted the challenge. Trinidad was deployed to Kuwait in 2011, where he served on the Anti-Terrorism Security Team. After getting out of the Marines, Trinidad moved to San Diego, California and began to pursue his undergraduate degree before returning to Massachusetts to be closer to his son. Now, Trinidad attends Salem State while working for the National Parks Service. He ultimately hopes to run for president of the United States. 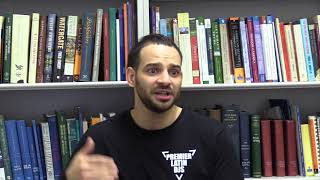