Randy Hendrickson of San Antonio, TX. joined the United States Marine Corps after graduating from high school in 2012. He went to boot camp in San Diego, CA. and trained as an aircraft flight mechanic. Randy was deployed to Japan in 2014 and Japan and Korea in 2016. While deployed, Randy worked on the aviation life support systems of military aircraft. While boot camp was worse than he thought it would be, it was worth it in the end, as Randy made real connections with the people he worked with in the Marines. He discusses his difficulty leaving the military, especially with transitioning back to civilian life while dealing with a drinking problem. He also discusses finding ways to cope, as well as being an integral part of the Student Veteran Organization on Salem State University campus. Finally, he discusses his views on the current U.S. military involvement in the Middle East and how serving in the military has shaped his current political perspective. 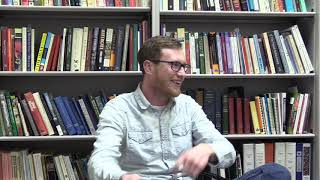