Joshua Jenkins, originally of New England, took a collegiate path in history before joining the Navy at age 30. Joshua talks about his unorthodox childhood being home-schooled in New Hampshire, and how it presented unique opportunities for him. He graduated from Gordon University with a history degree in 2004 and, after joining the military, Joshua became a Navy Hospital Corpsman specializing in environmental health. He was originally going to be stationed in New Jersey, but ended up spending his military career in Hawaii. Joshua served in a non-combatant role, and provides insight into the diverse roles of military personnel. Joshua talks about how being stationed near Pearl Harbor influenced his decision to pursue a Museum Studies graduate program at Salem State after leaving the Navy. 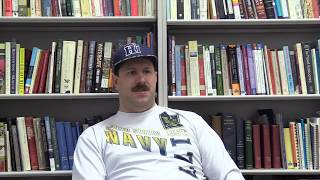