John Babstock of Waltham, MA joined the Navy in 1984 as a Hydraulic Mechanic on Aircraft Carriers and Small Gun Boats. He attended bootcamp in Great Lakes Illinois where he trained to the psychedelic music of Prince. He attended A school in Millington, Tennessee to learn how to be a Hydraulic Mechanic. After he left A school he was stationed in Jacksonville Florida, where he became a father, and a leader. He had several deployments including ones on the USS America in 1989, to the Persian Gulf 2001, and Kuwait 2007-08, to name a few. Over his 25-year enlistment he had numerous adventures, and lessons to teach as an administrator, and a father. In the following transcript John Bostock tells us all about his life as a boot, all the way up till he was a Senior Chief E-8 upon his retirement in 2009. He also discusses being a father, as well as a full-time college student alongside his youngest daughter. 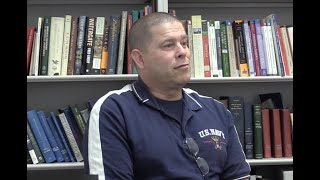