Crystal was born on October 18th, 1990 in Fitchburg, MA. She joined the Army after high school, and was the only student from her graduating class to do so. She was a Sergeant 89 B, and was first stationed at Fort Knox in human resources, but then as an Ammunition Specialist while stationed at Fort Drum, where she also held a position as NCO. She served in Afghanistan between 2010 to 2011 where she was part of a female engagement team. Of her experiences, Crystal appreciates most that the military provided her with the desire to “complete missions to standard” in all tasks including school work. Her interview portrays her desire to stay positive even when in a precarious environment, how she has balanced personal life with the military, and how her transition back into civilian life includes seeking a degree that will lead to a career in human resources. Crystal is married to another veteran, and they have a 2.5 year old daughter together. 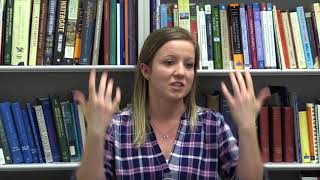