Alexander was born on August 30th, 1991 in Oxnard, California and constantly moved throughout his childhood, eventually ending up in Marblehead, Massachusetts. He joined the military to the surprise of his family who expected him to pursue an academic path. He was an E4 in the U.S. Army and his Military Occupational Specialty was as an Explosive Ordnance Disposal Technician. Alexander’s MOS required him to know how to diffuse bombs, landmines, improvised explosive devices (IEDs), etc. One of his missions included a security detail for President Barack Obama in South Korea which required him to inspect rooms for any possible explosives before the President would enter. Alexander was deployed to Seoul, South Korea in 2015 and describes his experience there as both fun but also tense as relations with North Korea remained strained. Having suffered lung damage during his time in the military, his interview gives insights into the complications experienced by veterans on medical leave and their transition into civilian life. Alexander studies geology and hopes to eventually begin a career in explosives engineering. 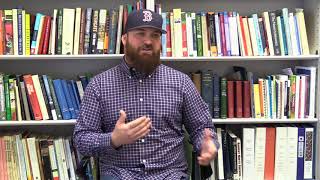